In an earlier blog entry, Erratic Electricity – The Silent Killer, I mentioned the fact that I use Windows Home Server in conjunction with offsite backup and a UPS to keep my data safe and sound.

Windows Home Server (WHS) is basically a cut down version of Windows Server 2003 Service Pack 2 and is geared toward use in the home environment (as the name would suggest). It can also be handy for small businesses where up to ten computers may be in use.

WHS does come with a raft of benefits but I am just going to focus on a few, specifically:

Pretty much all of the features of WHS are accessible through the Home Server Console. It provides a tabbed interface that is fairly straightforward and hides a lot of the complexity one might expect to encounter when running a server. 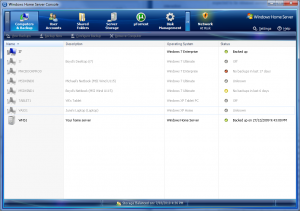 As you can see, I have a number of computers of which WHS has been made aware by installing the connector software. The software allows WHS to wake up your computers in the wee hours for an automatic backup if they are sleeping or in hibernation. Basically, this means that you will only ever have a backup for any given computer that is up to 24 hours old which is a plus for those who may only backup weekly or monthly at present.

WHS is also smart in the way it stores its backup data in that it employs single instancing on a cluster level. In plain terms, this means that if more than one computer has a chunk of data that is common to multiple computers it is only stored once on the WHS. This has the benefit of reducing the required space for backup storage as well as decreasing backup times (as the data needn’t be sent to the WHS again). 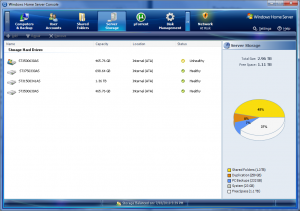 Speaking of storage, WHS is great for expandable storage and does away with the need for drive letters. Through the “Server Storage” tab you can quite easily check on how much space is being consumed and the health status of your drives. Expanding storage is as simple as dropping in a new drive and adding it to the storage pool in this tab of the Home Server Console. 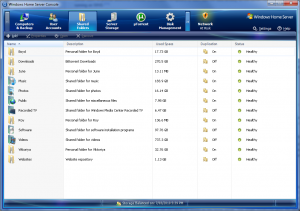 The “Shared Folders” tab allows you to add and remove folders, assign folder permissions as well as managing whether or not folders are duplicated. Folder duplication provides data redundancy on a folder basis. This is not quite like RAID1 where everything on one hard drive is mirrored on another hard drive at the time it is written. You also have the ability to see how much space is consumed by each folder. 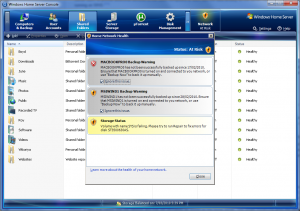 WHS also has the ability to provide a summary of the health of the computers on the network by providing warnings of failed or delayed backups and obsolete security software. This can save time on larger networks where you would need to go to each computer and manually check virus definition versions and force updates.

This is just the base functionality of WHS which can be expanded through the use of add-ons that can add things like BitTorrent, remote web folder access (so you can access folders from outside of the home) and Twitter for health status updates. You can also install regular software on the server and configure hidden functionality of the server via remote desktop if you want to do that too (for instance, I have 3CX VoIP Server installed and have enabled VPN access).

If you are keen on building your own WHS box, the operating system costs around $120 – $150 depending where you get it. Otherwise, you can buy pre-built machines from companies such as HP in the form of their HP MediaSmart Server range. There is also an anticipated release of WHS Version 2 (codenamed “Vale”) some time in 2010, so keep your eyes peeled!

In 2012, I obtained my Masters of Science in Information Technology through the University of New South Wales @ The Australia Defence Force Academy (UNSW@ADFA).

I have also written and edited articles for Neowin - you can check out my articles over @ https://www.neowin.net/news/poster/boyd_chan