Since building my new computer I have noticed that when I have closed Windows Media Player its process would continue to run in the background and, over time, gradually use up more memory. Now, I’m not short of memory by any means with 12GB in total but this problem does have the side effect of preventing my computer from going to sleep automatically.

So I did some research and found that owners of Logitech G15 keyboards also had this problem. Whilst I own a Logitech G19 (which is very similar apart from a colour LCD screen and a different array of programmable keys) I thought the same solution would apply.

So what was the problem?

Basically, it had to do with a feature introduced with Windows Vista called “SideShow”. It allows supplementary small screens to show information about important information like e-mail, appointments and weather. One feature of the Logitech keyboards is that it also provides the ability to control Windows Media Player but in order to do make that work Windows Media Player must be constantly running. 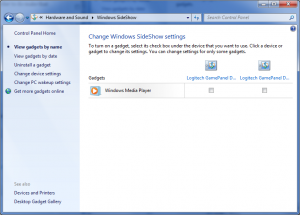 So if you have a Logitech keyboard or another one with similar functionality, perhaps this tip might help you out.