Some of us may have come across the term “4K hard drives” or perhaps “advanced format” hard drives. For many, these terms would simply drown in the sea of other confusing computer terminology that techies have come to love and consumers have come to hate.

So, the first question to get out of the way is what is a 4K or advanced format hard drive? 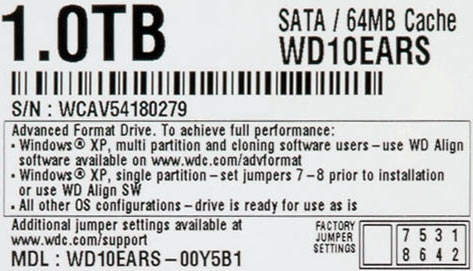 If you are buying a new hard drive off the shelf, it’s going to be mentioned like it is in the above label. These are going to become commonplace in hard drives manufactured over the next few years. If you buy a new computer, it may or may not have one of these hard drives as computer manufacturer. Basically, the mechanics of the hard drive will remain the same apart from one key difference which is the increased sector size (and subsequent consolidation of important surrounding regions on the disc such as gaps, sync bytes and address markers).

The next logical question is what is a sector?

Imagine that the platter inside a hard drive has concentric rings from the inside to the outside. Each of these rings is called a “track”. In particular, track zero is important as that is where important boot information is stored and information regarding how partitions are positioned on the disk. Each track is further subdivided into smaller chunks called “sectors”.

Traditionally, hard drives have used a sector size of 512 bytes but as hard drive sizes have increased the overhead of maintaining such a large number of error correction values, gaps, sync bytes and address markers has also increased. The move to 4 kilobyte sectors from 512 byte sectors (an eight-fold increase in size) significantly reduces the number of additional descriptive objects on the drive allowing for more efficient use of space on the disk.

However, with this change does come associated problems. Operating systems prior to Windows Vista with Service Pack 1 integrated do not have an awareness of hard drives with 4 kilobyte sectors. This is a problem as for optimal performance, partitions need to be created and aligned precisely with the boundaries of its sectors. So, if you are using Windows 2000, XP or plain vanilla Vista you could be doing yourself a disservice by not properly preparing the drive.

The easiest solution would be to make sure you are using the latest service pack for Windows Vista or Windows 7. However, if that is not possible you have two options, specifically:

On paper, the second option would be the easiest to implement however it is also the least robust. Simply removing the jumper could result in loss of data. It also prevents you from using more than one partition on the drive which can limit your options later on if you want to repartition. Therefore, use of the software tool provided by the hard drive vendor is the best option to avoid future difficulties and data retention.

It’s also worth noting that third party partition software can also run foul of the alignment issue if they have no awareness of 4k sector hard drives. If you fancy using a third party solution make sure to use the most recent version of the software and check specifically for 4K sector support.

Having said all of the above, if you aren’t into computers you might know a friendly geek or nerd that might be able to help you out if you ask nicely. It’s also a good idea to give them a little something for their time – you could easily be charged a heap using a shop (who might not align the disk at all) or a house call service.

So don’t take chances with your data – make sure you properly prepare your hard drive if it is of the 4K variety!