Brand Loyalty in the Digital Age

PowerPoint – The Root of all Evil

Just a quick one today as I was out at the SCG watching Australia summarily thrash the West Indies. Warner and Watson had fantastic knocks much to the enjoyment of the crowd and dismay of their competitors. 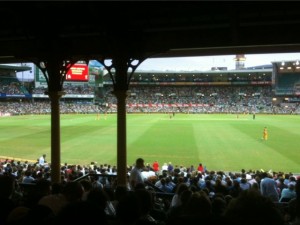 I attended the cricket today with a colleague from work with his sister and her two kids. On the trip there, during the game and on the way back home we had great conversations about all sorts of topics (and of course some talk about shop thrown into the mix).

Whilst for someone like me who maintains a number of friendships interstate with the assistance of social media (primarily Facebook, instant messaging a distant second and Twitter even further behind), it’s also great to get out and share a real life experience with them. At the best of times, I know I can be a bit of a hermit but I do believe that getting out and seeing something live is still the best way to enjoy something socially despite high definition broadcasting and asynchronous conversations afforded by modern technology.

Personally, I think social media in its current form can be of limited use for sharing experiences as they happen but form an excellent record of events as time progresses. Once bandwidth increases to the point that streaming live video and a reasonable quality and frame rate from mobile devices (my estimate being another four times faster than currently available) then I think we might see the next big step in the digital revolution.

How do you see social media interactions compared to real life shared experiences both now and in the future?