Last time, I covered the Panasonic washing machine that was shown off at the recent Panasonic home appliance launch last week. Today, I am going to cover off the new cordless phone that will be added to the existing lineup.

Granted, these days landline telephony might be viewed more as a legacy service compared to the convenience and relative cost effectiveness of mobile services (particularly with cap plans that can cover even the most insatiable needs for talking and texting). One thing that landline telephony does offer over mobiles is its ability to keep working despite a blackout in your neighbourhood for a prolonged period of time. Sure, you can still keep using your mobile but if your mobile wasn’t already fully charged and you have no backup charging solution (like a HyperMac external battery or a UPS) you’re going to have to make that battery last somehow (turn off data, turn off 3G, turn off mail account refreshing, turn down screen brightness, etc).

So great, landline telephones (in a pre-NBN world) can be powered over the copper lines from the telephone exchange but that does you no good if you have a cordless phone (which a lot of people have in their houses). If the base station has no power then the link between the cordless handset and the exchange is lost which means no phones calls in or out. Of course, if you have a traditional corded telephone (like the Telstra Touchfones that have hung around for years) then you’re golden but you’re also tethered to a spot with maybe a radius of a metre or two.

You’d think someone would make a cordless phone that’d work in a blackout, it’s 2011 afterall.

Well, Panasonic have come up with something to handle such a situation and it’s a simple and elegant solution called the “Power Failure Talk System”. With the new 803 series cordless phones due for release in February 2012 all you need to do is pop a handset into the base station (which is also the charging station when there is power). You can then make phone calls using the speakerphone function on that particular phone in the event of power loss. Otherwise, you can use one of the other handsets paired with the base station normally in cordless mode while a handset is in the base station providing power.

Another gripe that I have found with cordless phones is that range can be an issue if you have a multi-floor house or if you have a sparse property (so maybe a single level house with a large backyard). You might be doing some work in the backyard or up on another level in the house that is out of reach of the cordless base station. To mitigate this issue, the 803 series cordless phones also include a “location free repeater”. Much like how a repeater works for Wi-Fi this device repeats the signal from the base station to the phone and vice-versa. If you are looking to maximise range you should place the repeater towards the edge of the existing coverage provided by the base station (but not right on the edge where coverage drops off). Once you have found the best place you can hide it behind a plant or a lamp or somewhere convenient where there is a power socket.

The other main feature of the 803 series cordless phone is the inclusion of a 1.45 inch TFT LCD screen (which apparently a first for a landline cordless telephone). 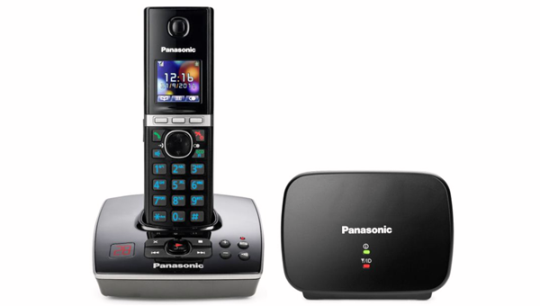 It looks nice and it might be a bit easier to read in the evening if you get a phone call. The buttons are also backlit so you don’t need to reach for a light just to dial a number.

Some other notable features are:

The Panasonic 803 Series Premium DECT Cordless Phone will come in twin and triple packs with pricing to be announced closer to release (but hinted to be somewhere around the top end of its existing range).